Public investment in people and communities is the single best way to grow the economy. But instead, over the last few decades Michigan and other states across the country have chosen a strategy of corporate tax cuts that simply do not work to stimulate the economy. And they've done so at the expense of corporate income tax revenue that could've otherwise been invested in middle and lower income earners and families that need those most, or in community infrastructure, education, and public health—each of which have suffered under the 'trickle down' economic policy of the few dozen years.

For more information on all the research done to prove corporate tax cuts just don't work, see Section 2, Bottom Up Prosperity, beginning on Page 4 of our full report here. The bottom line, though, is in longitudinal analysis done in countries around the world, those employing tax cuts for corporations and the wealthy failed to grow their economies. The only verifiable result was an increase in inequality. Just like we've seen in Michigan.

Specifically, just over the last 12 years, Michigan's corporate income taxes have been slashed via the repeal of the Michigan Business Tax in lieu of the new, lower-tax, CIT legislation. The result is the collection of over 50% less revenue from corporations in 2019 than was collected in 2008. 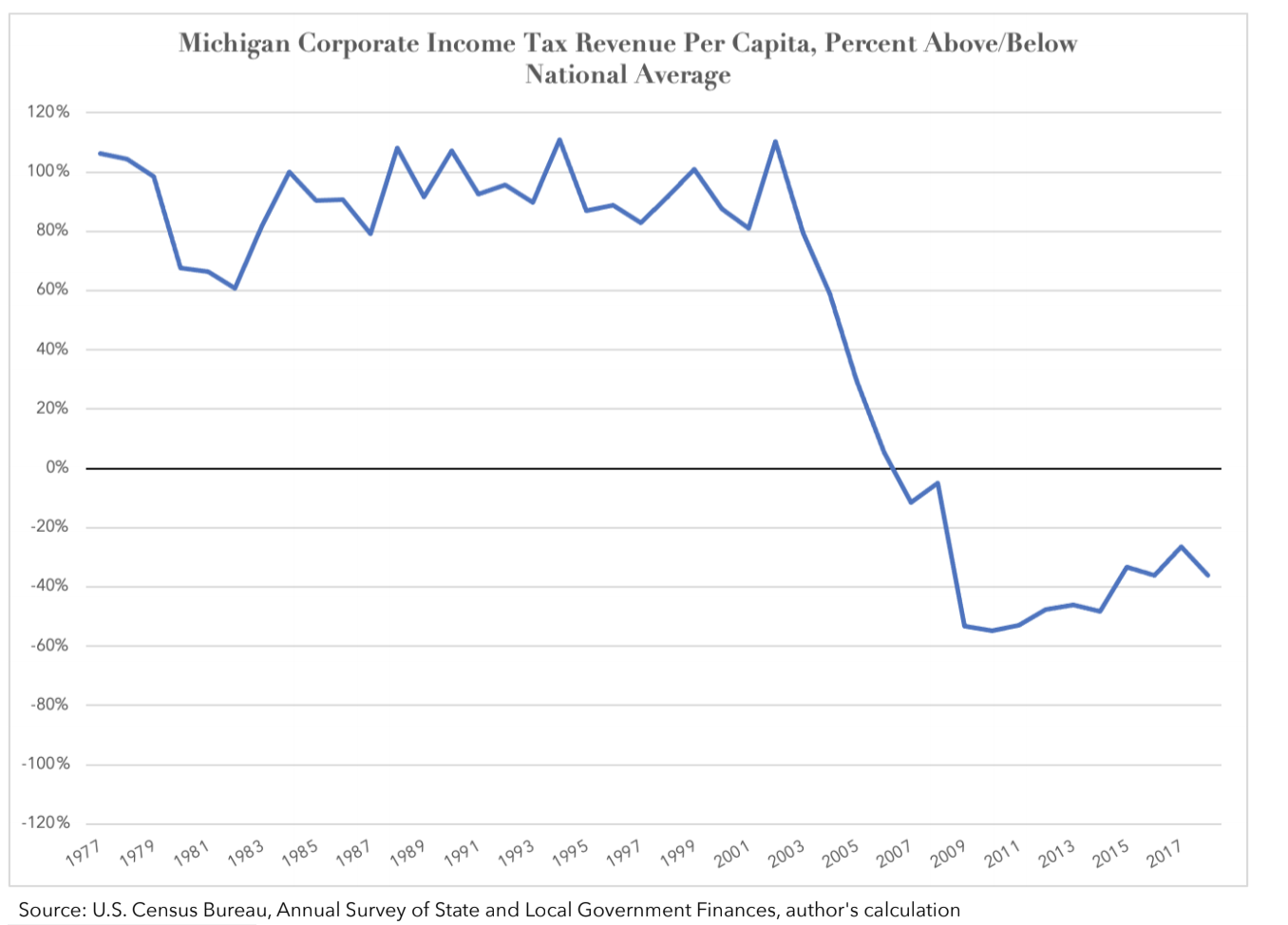 While this reduction of corporate income tax liability is part of a bigger trend of reduced state revenue from a variety of sources, the corporate income tax reductions as a percentage of their former revenue contribution have been particularly egregious. And the result of new loopholes for 'pass-through entities' to avoid Michigan taxation, and lower tax liability for corporations in Michigan? Less public investment in Michigan communities. 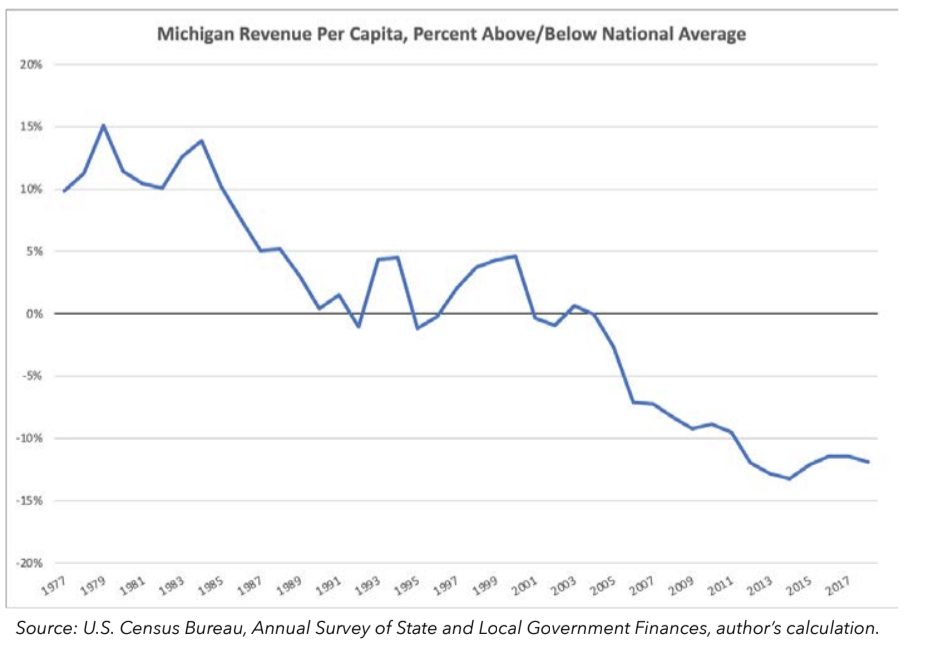 Along with the other revenue losses in recent years, the overall impact has been to reduce Michigan's revenue well below the national average, and, more importantly, to impact outcomes negatively for Michiganders across the board. Median income has dropped relative to other U.S. states, Michigan is one of only 13 states with declining literacy, and the state's infrastructure is rated a D overall. 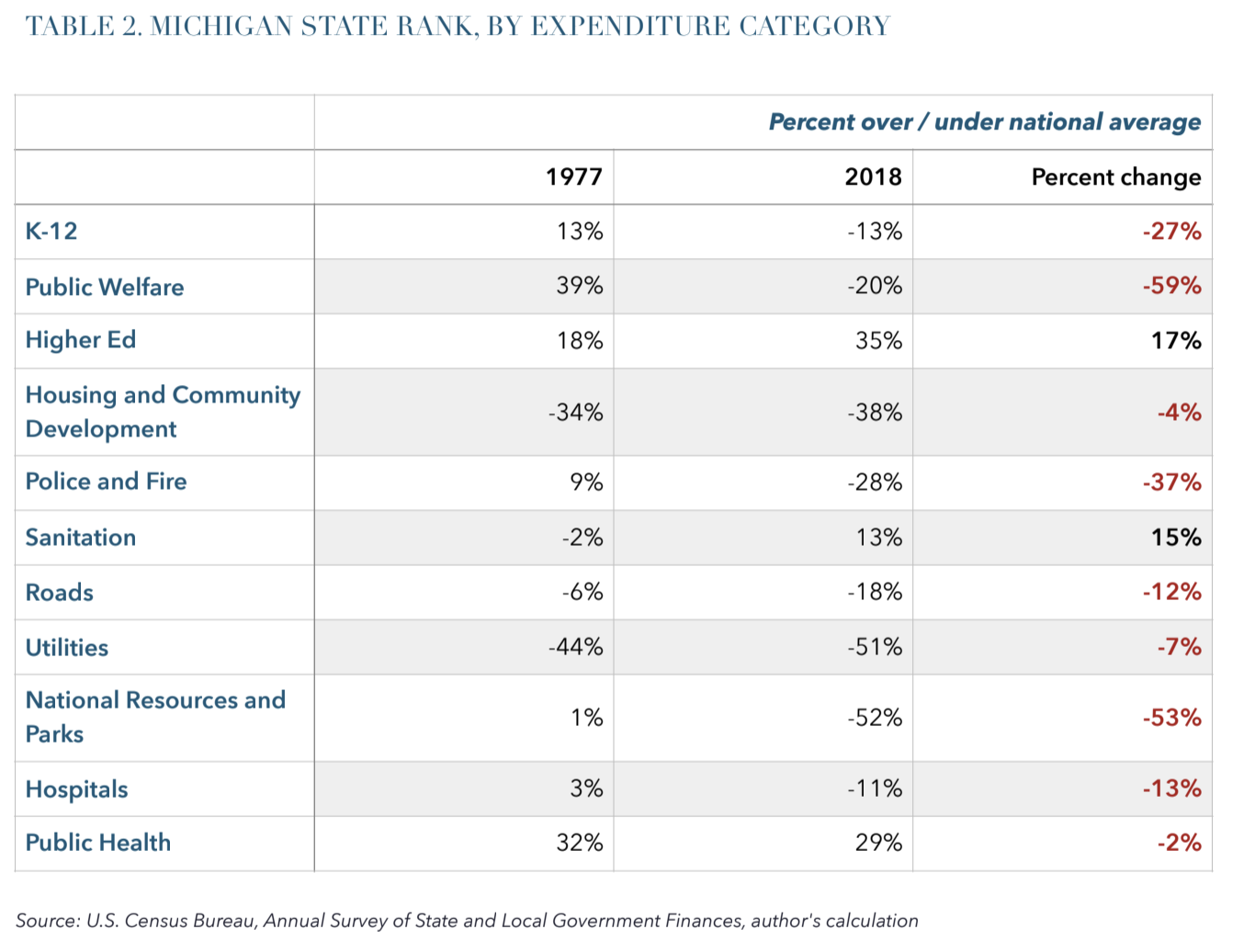 Now that it's been proven —through both data and the personal experiences of Michiganders across the state—that corporate tax cuts have harmed, not helped Michigan, we need to start moving the state in a new direction that can set the course for a sea change across the country. By prioritizing public investment in Michigan's people and communities instead of insulating corporations from contributing their fair share, we can drive lasting economic growth and shared prosperity.

1. Stop new corporate tax cuts: At the time of publishing, bills are being passed in the Michigan Senate that would further reduce the corporate income tax rate, which is already among the lowest in the nation. The people of Michigan deserve a widespread, forceful rejection of this proposal on the grounds of common sense data, fairness, and a hope for Michigan's future. Tell your legislators to stop cutting corporate taxes today.

2. End ineffective corporate tax credits: Corporate tax credits are ineffective at stimulating economic growth. In fact, in the MEGA tax program, a staggering 97% of corporations promising jobs in exchange for a tax credit never ultimately meet the number of jobs they promised to create (see pg. 24 of the full report here). Further, by some estimates, in 75% of cases, typical business incentives fail to impact corporate decisions on where to locate or create jobs. Yet, each year Michigan spends over $1 billion on business incentives in the form of tax credits, deductions and exemptions. Ironically, if put towards public investment instead of corporate tax cuts, improvements in school systems, for example, have been shown to have an impact on where businesses choose to locate, attract talent, and create more jobs. We need to stop ineffective corporate tax cuts in their tracks and invest no-longer forgone revenue in critical pieces of communities infrastructure, including our people, education systems, roads, water, and bridges, in order to #FundTheFuture in Michigan.

3. Reform the Corporate Income Tax: By raising the corporate income tax rate from being among the lowest in the country, Michigan can begin to recoup some of the revenue lost over the last decade since the repeal of the Michigan Business Tax. Reductions in Michigan's Corporate Income Tax rate are not serving Michigan communities or stimulating the economy. Further, the loopholes created for pass-through entities in past CIT changes cannot stand. Targeted reforms to close those loopholes for large, profitable companies are critical to restoring the tax base, and ending a policy of giveaways to corporations at the expense of Michigan's future.

To read more on the proposed changes to the Corporate Income Tax, as well as the case against Corporate Tax Credits, see our #CorporateTaxCutAren'tFree revenue package below, or check out the full list of options to raise more revenue for Michigan communities here.

Next, take the first step to a brighter future for Michigan by telling your legislators to stop bills that cut corporate taxes even further, because #Corporate Tax Cuts Aren't Free.

Please check your e-mail for a link to activate your account.